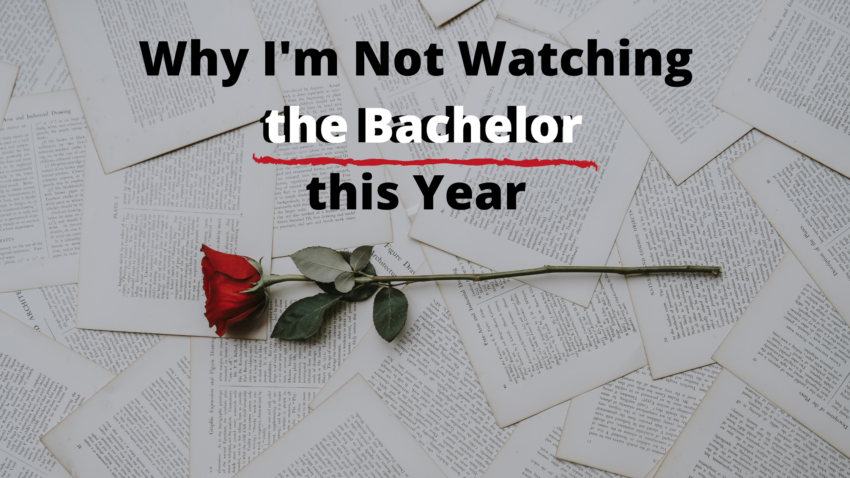 Why I’m Not Watching the Bachelor this Year

Ladies and gentleman, it’s Bachelor season. Nothing brings so many Americans together on Monday nights quite like this show. There’s just something in the air when Bachelor season rolls around. You can sense the drama that’s about to unfold tingling like static in the atmosphere. Conversations over teasers and trailers start bubbling up, and people already start speculating why this season is going to be *insert Chris Harrison voice* the MOST DRAMATIC SEASON OF THE BACHELOR YET!

For the past five years (minus Arie’s season) I was that girl who regularly watched, and I loved every minute of it. From Ben Higgins, to Pilot Pete and everything in between I was a Bachelor junkie each time December rolled around. That won’t be me anymore though, because I’ve come to terms with why I need to stop indulging in my biggest guilty pleasure show.

Reality t.v. is tricky sometimes, because non-scripted shows give off a sense of authenticity- the same type we experience in real life. Despite personally never knowing any of the girls who appeared on the show, I always got the sense that I knew them in a way. Maybe because the show moves SO fast with girls falling in love with the Bachelor over a couple of months. Or it may be how much personal information gets shared on the show- like, really personal information. These girls open up their lives for America to watch, by talking about their biggest insecurities, hardships and secrets in life. When you know THAT many personal things about somebody, it’s not hard to feel like you know them really well. And that’s exactly what makes watching the Bachelor SO fun. Everybody feels like they’re entitled to knowing what’s best for the Bachelor- which girls to keep another week, and which to send home over our perceived idea that we actually know these girls well- and know them well enough to make up our minds about them.

Well, in case nobody’s told you: you DON’T know the girls on the show. They might not be strangers to you, but that doesn’t mean you know them for who they are off the show, and outside of social media. That is like .001% of a person’s life- the rest we don’t get to see from our t.v. screens on Monday nights.

I’ll admit, it’s fun debating with friends over which girls should be sent home each week, and which contestant should be picked in the end. But I can’t count how many times I’ve heard that a certain contestant isn’t compatible with the Bachelor so they “better get sent home”. Does any of this seem wrong to you? That we somehow believe we, sitting on our couches at home, are better at picking a wife for the Bachelor than the Bachelor himself? The Bachelor who is spending time with the contestants in real life? Makes zero sense- zinch, nada, none.

But I’ve done that every season and didn’t realize it was such a problem until now. I have no business getting upset with the show when the Bachelor doesn’t pick who I picked for him. Literally who am I to go picking a life-partner for somebody I don’t know, by choosing somebody for him that I also don’t know? It’s actually kinda funny when you think about it, the amount of times we’ve all done this. Lord help us!

Another problem for me is, I would always get WAY too invested in this show. More specifically, the lives of the contestants on the show, because that’s what happens when you think you know someone – you keep up with them. I would follow all the contestants on the show, and keep up with their lives on social media. The contestants and the Bachelor took up so many of my thoughts without me even realizing it- basically living in my head rent free for years to come. And I didn’t realize how invested I was until this summer, when a story broke that honestly shocked my world.

If you don’t know, it involves Season 23’s Bachelor Contestant Colton Underwood and his finalist from the show, Cassie Randolph. Colton and Cassie had INSANE chemistry from the get-go. They went through a lot of hurdles to be together by the end of the show, and I thought they finally made it at last to a good place. I was really rooting for them, and thought they made the cutest couple from following both on social media. Well boy was I wrong. Long story short, the couple broke up this summer and parted ways online by sharing they wanted the best for each other and they have nothing but respect for one another, yada yada yada. That should have been that, but it wasn’t where the story ended for them. After almost two years of being together, a story broke that Cassie was filing for a restraining order against Colton due to alleged stalking and harassment. It’s alleged that Colton sent harassing texts to Cassie and her friends, showed up at her house at odd hours after they broke up, AND planted a tracking device on her car. YIKES.

This was someone who two months ago, I respected as a person. From what I saw on social media he had so much love for Cassie and they were the cutest couple. Although I know social media doesn’t show things as they are (that’s a blog post for another time!) I still got such a sense of a happy couple from them. I, of course had no idea there was trouble in paradise. So going from seeing a doting couple who I thought was #goals, to suddenly seeing the fallout of everything that happened was a HUGE shock. I was so invested in their relationship, it honestly felt like I was watching this happen to people I knew. And that hurt. And I didn’t realize the extent of my investment in them, in the show, in ALL OF IT until things got really messy, really fast.

I’m still in so much disbelief over what happened, and it’s an awful feeling because both the Colton that I used to respect and the Colton I know now exist in my mind simultaneously. I can’t shake the feeling that someone I admired turned out to be a person I lost all admiration for. I know this is going to sound dramatic but spare me here- it honestly haunted my mind me for weeks after I found out about the alleged stalking. I couldn’t stop thinking about it. And it’s something that quite honestly, I won’t be forgetting for a long, long time.

And this isn’t the first time I got really upset from a show. Every time a couple I was rooting for broke up I was de-ves-tat-ted.  And if you watch the show, you know how often this happens. One day I will get to the bottom of why more relationships from this franchise fail than succeed. In the meantime, I’ve decided to spare myself from nursing broken hearts that have nothing to do with me by when couples on the show break up. I won’t be watching this season with Bachelor Matt James. And I won’t be watching the Bachelorette either, no matter who it is. In a way I feel like I’m missing out on that huge social experience I share with my girlfriends, but I’ll survive! There’s other shows to watch and other things to do! And I, for one am so excited to not have this show live rent free in my head this year!