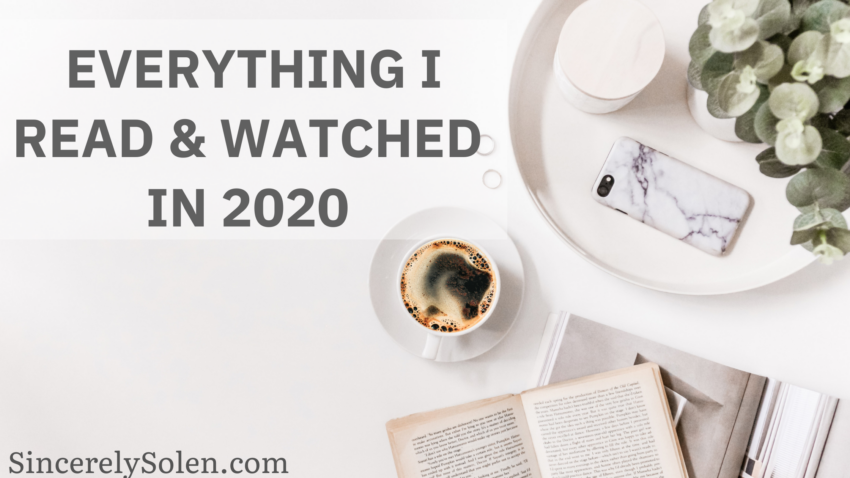 I only watched the first season but the mystery was SO good. Gorgeous cast, and loved how many stories it told through each character’s background of secrets. Didn’t know who was the culprit until the last episode!

So I don’t know anything about the real estate business but man oh man is it interesting! The office dynamic here is SO chaotic, but it just works really well. Gives you a glimpse into the glitz and glam of California’s richest.

Okay I did NOT like this show. The only part that I somewhat enjoyed was the murder mystery of Carole Baskin’s husband- that was juicy. But everything else was too much for me- no shortage of abusive relationships with people and animals, very sad living conditions, and the raging hatred among the main characters was a LOT. I stopped watching halfway through.

Garth Brooks the Road I’m On

Garth Brooks has a hell of a voice and such a interesting life story to match. I learned a lot about his family and saw another side to him that was really special as a family man. I’m just not the world’s biggest Garth fan, so I lost interest in the show early on. But If Netflix ever does a documentary on Blake Shelton, I would watch that beginning to end! #NetflixPlease

Uhm, super PHENOMENAL show with mystery that’s done really well up until the last episode. If you like small town pains, high school drama, an unsolved murder, private detectives, love triangles, messy family dynamics, and real life truths…you’ll like this one! Kristen Bell absolutely nails this role and she was the perfect Veronica Mars.

I am a little too obsessed with the legacy of the Kennedy family. It has everything a good story needs- love affairs, politics, wealth, family drama, murder, conspiracy and (maybe!) Marilyn Monroe! Of course it’s a Hollywood show at the end of the day, but this one was pretty factual for the most part and I learned a lot from it! Goes by pretty fast and perfect if you’re a nerd for American history like me.

“In Toulouse, Louisiana finding your one true love happens sometime around high school. If you’re lucky, he might be the man you thought he was. But as four friends are about to find out, not every girl has luck on her side…” Read more from Goodreads here

“Annie Cassidy dreams of being the next Nora Ephron. She spends her days writing screenplays, rewatching Sleepless in Seattle, and waiting for her movie-perfect meet-cute. If she could just find her own Tom Hanks—a man who’s sweet, sensitive, and possibly owns a houseboat—her problems would disappear…” Read more Goodreads here

“The novel tells the story of Ponyboy Curtis and his struggles with right and wrong in a society in which he believes that he is an outsider. According to Ponyboy, there are two kinds of people in the world: greasers and socs”. Read more from Goodreads here

“Rachel catches the same commuter train every morning. She knows it will wait at the same signal each time, overlooking a row of back gardens. She’s even started to feel like she knows the people who live in one of the houses. “Jess and Jason,” she calls them. Their life—as she sees it—is perfect. If only Rachel could be that happy”. Read more from Goodreads here

“The place is Albany, New York. The year is 1936. Six-year-old Jean-Luc LaPointe, his little sister, and their spirited but vulnerable young mother have been abandoned—again—by his father, a charmer and a con artist. Read more from Goodreads here

“A successful magazine editor and prize-winning journalist, Sally Brampton launched Elle magazine in the UK in 1985. But behind the successful, glamorous career was a story that many of her friends and colleagues knew nothing about—her ongoing struggle with severe depression and alcoholism”. Read more from Goodreads here

“Missoula, Montana, is a typical college town, with a highly regarded state university, bucolic surroundings, a lively social scene, and an excellent football team — the Grizzlies — with a rabid fan base. The Department of Justice investigated 350 sexual assaults reported to the Missoula police between January 2008 and May 2012. Read from Goodreads here

“Millions of Americans try drugs or talk therapy to relieve depression and anxiety, but recent scientific studies prove certain alternative treatments can work as well or better-often bringing on a cure”. Read more from Goodreads here

“It’s the early 1970s. The town of Ringgold, Georgia, has a population of 1,923, one traffic light, one Dairy Queen, and one Catherine Grace Cline. The daughter of Ringgold’s third-generation Baptist preacher, Catherine Grace is quick-witted, more than a little stubborn, and dying to escape her small-town life”. Read more from Goodreads here

“Big Little Lies is a brilliant take on ex-husbands and second wives, mothers and daughters, schoolyard scandal, and the little lies that can turn lethal”. Read more from Goodreads here